” My flowers series first came out at an exhibition during the Tokyo Designer’s Week in 1988. It was a strange and somewhat macabre coincidence, but the very space I have been allotted for the prototypes of my first Flowers, was also occupied by Shiro Kuramata’s chair Miss Blanche with roses embedded in the acrilic. I knew practically nothing about the maker Edra, discovering the company only when I saw Tatlin for the first time in a Tokyo showroom in 1989. I did know, of course, that Massimo Morozzi was a member of Archizoom, but had never met him. I don’t know how or why he found out about me. But on cold day after the beginning of 1990, we met in a Thai restaurant in Tokyo famous for its spicy dishes. He appearing wearing a pair of sunglasses, Ray-Ban I think, white shirt and jeans. Since then I’ve never seen him in anything else but jeans. A disgruntled Steve McQueen, I thought. A deep voice made husky by countless Marlboro cigarettes. He embodied the radical character. I remember a sensorial conversation. At the end of august I was ready in Pisa looking at the definitive prototype. There I met Valerio Mazzei, president of Edra. A wild tiger, with the energy of bulldozer aiming straight for the finishing line. This company was made up entirely of young people, forthright and good-natured, like a gang of friends. They were more likely a fashion company than a furniture maker. A far cry form the restrained sobriety of the furniture-makers of the Brianza region of Italy. In the middle september Edra premiered the Flowers series in Milan’s Brera district. I think it was one of the first “Fuori-Off Salone” events ever.

The concept of this series is simple. The flower is an organic concentrate of beauty. Getsuen is my rendering of Kyosei, the traditional Japanese concept of living in harmony with nature. It is also a modest antithesis of the current concept of ‘ecology’ where nature is an essentially ‘sober’ entity. I am surprised at the number of people in the world who have collected these flowers. The irony is how few of these people live in my country. ” 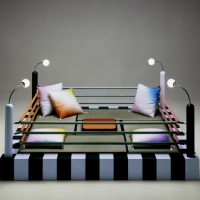